In 1974, a Rolling Stone article relayed the encounter of an uncanny new device: the Sonic Stimulator, a machine developed by How Wachspress that allows users to feel sound. The same year, information technologist Ted Nelson dedicated a segment of his seminal « Computer Lib / Dream Machines » on Wachspress’ psychoacoustic experiments.

“The wave passes through the sole of the foot and goes up into the index finger while I press ‘play'” is a reflection on listening beyond hearing created by media artist and student, Anne-Marie Trépanier, as part of the two-week interactive workshop Talking to Each Other facilitated by the Feminist Media Studio and Access in the Making Lab at Concordia University. In this short audio piece, these two documents are remediated into a speculative narrative. An old answering machine cassette tape is played back. A voice recounts their curiosity for this new piece of technology that expands sonic perception beyond aural mechanisms.

Envisioned as a form of media archeology, this work is an invitation to revisit technological artifacts from the past and wonder : Which organs are involved in listening? Which technologies allow us to access sound? And how do they shape the way we listen?

Anne-Marie Trépanier is an artist-researcher, editor and MA student in Media Studies at Concordia University, where she previously completed a BFA in Intermedia/Cyberarts. Her artistic practice focuses on the mediation of embodied knowledge through language and technology, and affective infrastructures. Her work has been presented in group exhibitions and public screenings at AXENÉO7, Eastern Bloc, Fonderie Darling and other venues in Canada. Her writing has been published in esse, Spirale, Synoptique: Online Journal of Film and Moving Image Studies, Architecture | Concordia and the Concordia Undergraduate Journal of Art History. She is also the cofounder and coeditor of Cigale, a bilingual periodical publication dedicated to the production and dissemination of artists’ writings. Trepanier’s current research interests include cyberfeminism, experimental publishing and archiving practices, shadow libraries and documentary practices in the arts. Parallel to her artistic and academic career, she has been working for artistic institutions in Montreal including the Canadian Center for Architecture, the Leonard & Bina Ellen Art Gallery, DHC-ART Foundation and the Phi Center.

Remember how we laughed at the Orgasmotron in Woody Allen’s Sleeper?

Well, it turns out not to be a joke.

An individual named How Wachspress has been developing just that

except that he has more elevated purposes in mind.

His devices transpose sound into feelings;

you touch your body with an open-ended tube

or some other kind of soft fixture

attached to his device,

which in turn is attached to a hi-fi.

Supposedly, the sensations are very, very profound and moving.

You apparently can take them anywhere on your body

and the effect is super relaxing and emotionally engrossing.

Wachspress thinks he has reached an entire neurological system

that wasn’t known before.

He thinks that it is kind of a new modality of experience and a generalization of music and touch.

Here, I’ll read you an excerpt from an interview I’ve read in the Rolling Stone.

The Sonic Stimulator idea is simple.

The ear is a specialized organ for transmitting sound signals to the brain,

but since sound is merely physical vibration, any pressure-sensitive organ can hear.

The palm of the hand, for example, very good, says How,

good hi-fi reception because of its abundance of nerve endings.

Or the groin, also good for the same reason and because of the various internal organs nearby,

each with its own complement of sensors.

The elbows and the knees are good listeners too

because they readily transfer sound vibrations to the skeleton,

thus [blank] messages all over the body.

let me know what you think! Call me back! Bye.

[A CASSETTE TAPE IS HANDLED]

[CASSETTE IS INSERTED IN A PLAYER]

[DISTORTED BUZZ MOVES TO THE LEFT]

[A CHOIR OF OSCILLATORS BEING MODULATED]

[A SUSTAINED WAVE MOVES FROM THE LEFT]

[AND BACK TO THE LEFT]

[TO THE RIGHT AGAIN]

[ONE OF THE OSCILLATORS GETS FUNKY; THE SOUND OF A LAUGHING CARTOON BEING IMMERSED IN AND OUT OF WATER]

[ANOTHER WAVE FADES IN, THIS ONE SOUNDS MORE LIKE A HOME ALARM SYSTEM]

[SOMEONE TAKES THE CASSETTE OUT OF THE PLAYER]

[PITCH GOES UP AND SLOWLY FADES OUT] 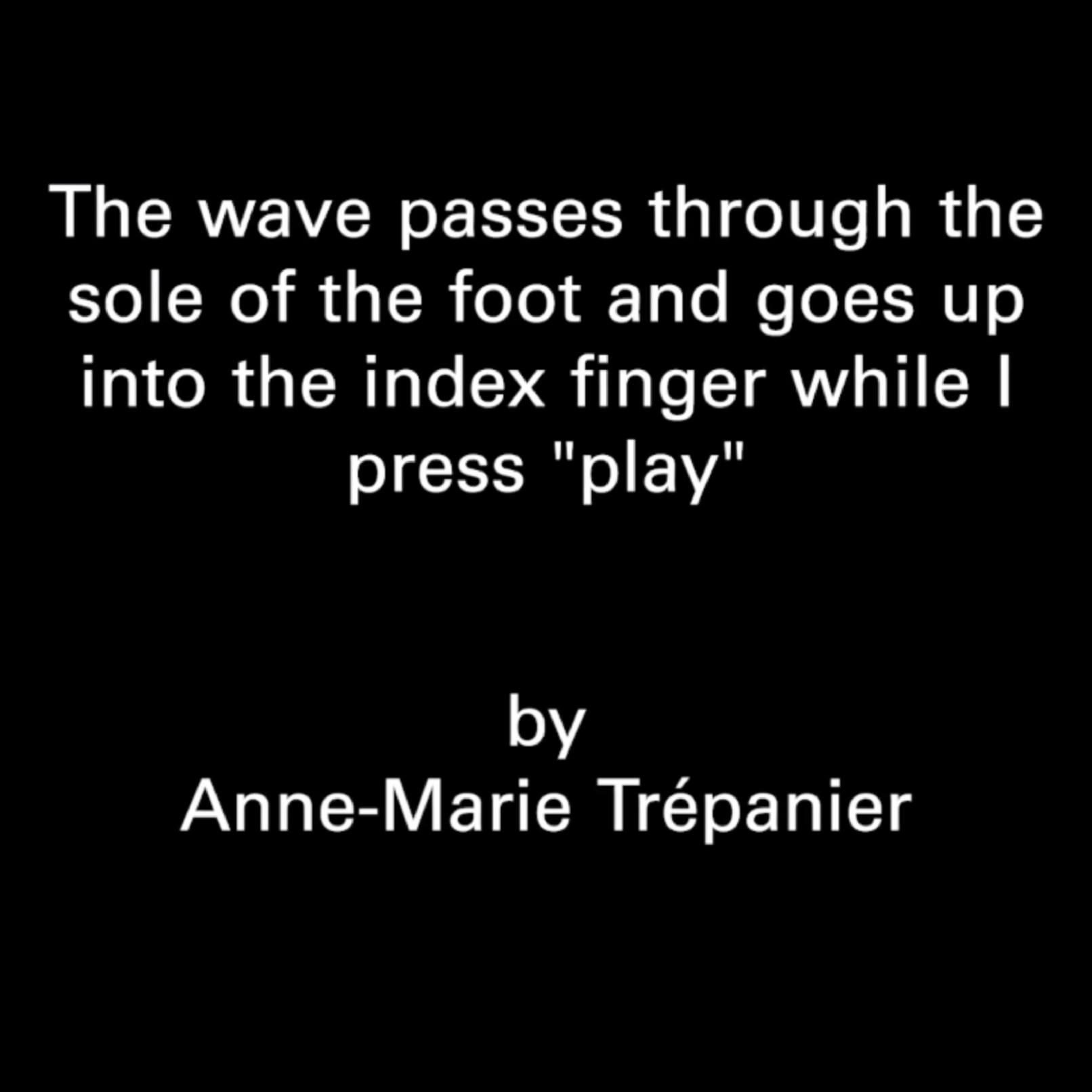