The scholarship on transatlantic slavery has long benefited from the often-exhaustive data published in the fugitive slave archive. Ubiquitous throughout the transatlantic world, fugitive slave advertisements were commonly placed by slave owners seeking to recapture enslaved people who had fled. Such notices commonly provided specific, invasive detail about an enslaved person’s body, dress, skills, languages, and even gestures and mannerisms. However, enslaved females standardly comprised a smaller number of runaways. Nevertheless, the fugitive notices that do exist for female runaways shed light on their lives and experiences. Through an examination of the fugitive slave archive and other sources, this paper seeks to fill some of the scholarly gaps on the experiences of enslaved females of African descent in Canada. More specifically, this paper will offer some distinctions between the lives and experiences of enslaved females in slave minority (temperate) and slave majority (tropical) sites in the British transatlantic world.

Charmaine A. Nelson is a Professor of Art History at McGill University. She has made ground-breaking contributions to the fields of the Visual Culture of Slavery, Race and Representation, and Black Canadian Studies. Nelson has published seven books including Slavery, Geography, and Empire in Nineteenth-Century Marine Landscapes of Montreal and Jamaica (2016), and Towards an African Canadian Art History: Art, Memory, and Resistance (2018). Her media work includes CBC, BBC One, PBS, Huffington Post Canada, and The Walrus. Most recently, she was the William Lyon Mackenzie King Visiting Professor of Canadian Studies at Harvard University (2017-2018). 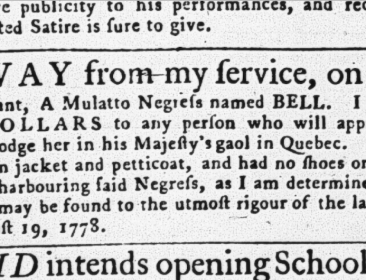