Much like archiving lesbian history, envisioning lesbians in urban space and tracing their histories poses challenges of legibility. In this presentation, I provide a retrospective of my research and community work on mapping and archiving lesbian Montreal that engages the issue of lesbian invisibility in urban space and highlights lesbian place-making, urban activism, collective memory and community-based archiving. I begin with the challenges posed by envisioning cities in ways that do not render lesbians invisible. Next, I turn to the project of mapping lesbian historical neighbourhood formation processes through mapping collective media representations of their institutional and commercial spaces. Thirdly, I examine how Montreal lesbians have claimed the right to the city through the historical analysis of their participation in demonstrations. The presentation concludes by reflecting on the complexity of reading the spatial into Montreal’s lesbian archive.

Julie Podmore is a college professor in Geosciences at John Abbott College and Affiliate Assistant Professor and Lecturer in Geography, Planning and Environment at Concordia University. She is also a member of the Chair of Research on Homophobia at UQAM. The intersections between gender and sexuality in urban space have been her sustained research focus, a perspective that is reflected in her publications on Montréal’s lesbian geographies. “Queering Canadian suburbs: LGBTQ2S place-making outside of central cities” is her current research project. She is also co-editor of three forthcoming publications: Lesbian Feminisms (Zed Books), “Placing LGBTQ+ urban activisms,” (special issue of Urban Studies) and “Féminismes et lesbianismes” (special issue of Recherches féministes). 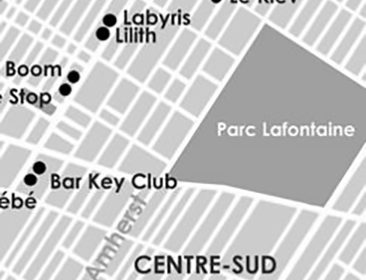