The Powers: World-Making with the Sistership of Spectral Technologies

In World-Making with the Sistership of Spectral Technologies, Katherine Kline, Jessica Mensch and Emily Pelstring introduce their creative universe and offer background for their work-in-progress: a live web-streamed show called Sistership TV. The three artists work under the moniker The Powers, which is at once a band, an artistic collaboration, and a research-creation group committed to weaving alternate realities through video, music, story-telling, dance, and ritualistic performance.

The Powers create a speculative reality that is absurd, irreverent and terrifying, inhabited by animal kin and monstrous creatures, haunted by other-dimensional entities, and erupting with the repressed archetypes of classical myth. In this world, The Powers foster dynamic relationships with all sorts of beings—earthly, embodied, and otherwise. They invoke a pantheon of characters and deities, and include them in feminist reconfigurations of hetero-patriarchal myths. They draw inspiration from mythological trinities of sisters such as the Graeae, the Gorgons, and the Fates, and recast these icons in reclaimative, chaotic media events. Their current web-based TV show borrows formal language from live sketch television and televangelism to explore various topics, including the cyborg, telepresence, hysteria, the seance, witchcraft, and animal communication.

The Powers will speak to their commitment to generating enclaves for collaborative play, drawing inspiration from Donna Haraway’s multi-species friendships and tentacular thinking (2008, 2016), Rosi Braidoitti’s call for affirmative experimentation with heterogenous assemblages (2006), and Helene Cixous’s rewriting of the myth of Medusa (1976).

Katherine Kline is a psychoanalytic therapist, musician and PhD candidate in Communication Studies, Concordia. Her current research looks at the intersection of psyche and materiality through a study of Wilhelm Reich, dendrophilia and practices of channeling and mediumship.

Jessica Mensch is a Brooklyn/Montreal artist currently pursuing an MFA at Hunter College in New York, NY. Mensch has exhibited and participated in residencies internationally. Her work has been supported by a Canada Council Grant for Visual Arts (2014), and she was a finalist for the 2013 RBC Painting Prize.

Emily Pelstring is an artist who creates moving image works for screen, installation, and performance. Her work has been shown internationally in galleries, film festivals and music festivals, and has been supported by SSHRC and Canada Council. She is full-time faculty in the Department of Film and Media at Queen’s University.

The 5 à 7 and Brown Bag Speaker Series provides a forum for informal encounters among members of the Studio and the community. It consists of presentations, conversations, or critique seminars by visiting scholars, artists and activists, presentations by Studio members of work in progress (both textual and media-based), and discussions around themes that link the practices and commitments of the Feminist Media Studio community. A common theme of the 5 à 7 and Brown Bag gatherings consists in exploring the intersections of research, creation, and political engagement in feminist work (historically, and in our current efforts to articulate our research praxes, collectively). 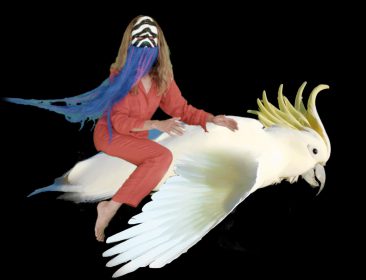