A colleague and former fellow History of Consciousness alum, Joe Dumit, recently posted to social media an article he had written entitled “Writing the Implosion: Teaching the World One Thing at a Time”. In it, he details a method he teaches, drawing from Donna Haraway and Gilles Deleuze, for “waking up to connections” in our research. He calls his method an “implosion project” to reference how objects are made of “imploded histories” that must be teased open to show the “sticky economic, technical, political, organic, historical, mythic, and textual threads that make up its tissues” (Haraway).

This method is about following connections, doing interdisciplinary and eccentric research and research-creation. Fundamentally, it’s about finding other ways of “thinking, writing and doing politics”.

Joe Dumit outlines his “Implosion Project” as a set of assignments, to guide those who complete them through a series of questions that provide not only prompts to think the texture of one’s object, but a set of analytic twists that might invite those who participate to think their project, ideas, thoughts, or objects differently.

He argues “Implosion Projects are attempts to teach and learn about the embeddedness of objects, facts, actions, and people in the world and the world in them. The emphasis is on details and nonobvious connections, as well as on the many dimensions with which we can analyze them: labor, professional, material, technological, political, economic, symbolic, textual, bodily, historical, educational.”

You can find more information (and detail of the Implosion Project) here.

Electrified by reading this assignment (and chomping at the bit to do it at the Studio, and do it in a non-solitary mode), this project will consist of a three-day workshop to move through the five steps of the Implosion Project Dumit outlines:

Whoever would like to participate should bring a research or research-creation project – either one that is new and ill-defined (i.e. that you are about to set about undertaking) or one you are stuck on and want to think about in new ways.

We will work individually together and, following this, share what we have come up with after each day’s work. No one will facilitate; no one will have to present or share work if the exercise did not bear fruit. It would rather be a way of making what is often a solitary experience into a collective and shared exercise. The format is up for discussion, as is the timeline. It may lead to a future writing/making group, or it may not. It may lead to unforeseen outcomes; it may not bear fruit… It is meant as an exercise for thinking/writing/making differently, and for building research kinship. 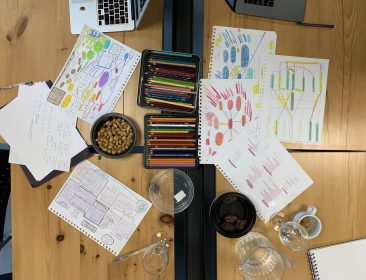