How might media figure and refigure embodied action, attentive to the complex intersections of race, gender, sexuality and class, and their differential force in making certain bodies appear in public life and others quite simply disappear? This Work Group examines how the legacy of feminist and queer media practice might inform socially engaged interventions in the current political landscape, under the repressive force of global capitalism, but in the interstices of global power, crossing cultural contexts in the interests of a liberatory praxis.

We propose the concept term trespass as a methodology for manifesting bodily crossing, for signaling the modes of defiance (to the force of law, the exercise of power and domination, exploitation and precariousness), but also to signal the movement of what Chela Sandoval calls “differential consciousness”, bodily limit, desire and affect. Trespass foregrounds also the processes of escape and capture which are enacted in and through the dense ecologies of life in a globalized present.

How might coalitional politics be conceived in and through experimental actions or public projections? How might the complexity of bodily life and interactions be represented? How might media mediate beyond the tropes of immediacy, technological extension, viral spread or dissemination? How might we trace alternative theories for the globalizing dimensions of media practice? 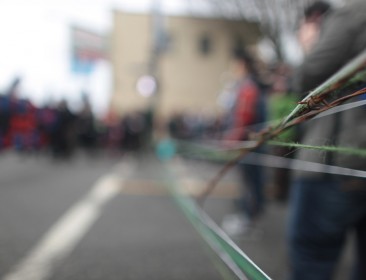